Join the Dutchess County Democratic Committee on Tuesday, October 17th at 7pm at the Hellenic Center behind the Kimisis Greek Orthodox Church in Poughkeepsie for a debate on the important question, “A New York Constitutional Convention?”.

The PRO side will be represented by Gerald Benjamin from the SUNY New Paltz Benjamin Center.

The CON side will be represented by Michael Kink, from Strong Economy For All.

How citizens vote on this question could have a large impact on our state for decades to come. 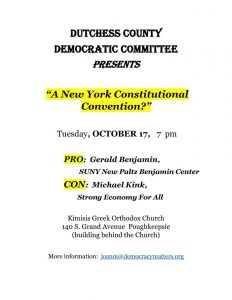