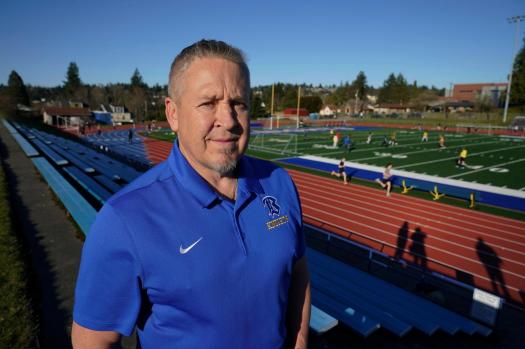 Joe Kennedy, a former assistant football coach at Bremerton High School in Bremerton, Wash., poses for a photo March 9, 2022, at the school’s football field. Kennedy lost his coaching job for refusing to stop kneeling in prayer with players and spectators on the field immediately after football games, and he took his case to the U.S. Supreme Court. (AP Photo/Ted S. Warren)

As a non-Mormon, native Utahn, I grew up with an acute sensitivity to the ways in which the church worldview crept into the business of the secular state and the everyday lives of residents. For example, in an odd mix of theological doctrine and politics, a culture that promoted large families simultaneously elected legislators who chronically underfunded schools, “keeping taxes low.”

This week, the Supreme Court sided with Joe Kennedy, a high school football coach who was dismissed for praying post-game at midfield. The majority wrote that his “quiet, personal religious observance” was protected by the Constitution. The dissenting minority, noting that the coach was often joined by some of the team’s players, said the decision elevated “the rights of a school official” (publicly employed) “over those of his students … particularly vulnerable and deserving of protection.” (https://www.washingtonpost.com/politics/2022/06/27/supreme-court-praying-football-coach/)

No adult educated in public or private schools can be unaware of the social pressures on children and adolescents to conform, join the crowd, please authorities, and avoid isolation. The minority opinion recognized this real-world dynamic as it would play out in a team that undoubtedly had participants of varying religious beliefs, or none at all.

The aggressive new Supreme Court majority, on the other hand, chose to wrap its Constitutional reading around an ideological preference, ignoring the impacts on Americans and the diverse ways they choose to live their lives. Similarly, in reversing Roe vs. Wade,  the eminences who claimed in their confirmation hearings a fealty to “settled law” have sent back to the states a storm of chaos that will disrupt millions of lives.

The new majority’s decision, hailed by conservatives as an affirmation of religious freedom in this country, instead leaves many Americans fearful of what additional rights and freedoms this Supreme Court is ready to strike down. We witnessed the extremism of the right wing in the January 6 events. Now it is being issued by unaccountable, life-tenured judges.