We have only two weeks to make sure the Invest In Our New York Act is prioritized in this year’s State budget. Please take 10 mins to call NYS leadership and your electeds to make this happen!

SCRIPT: I’m calling to make sure [Speaker Heastie/Leader Cousins] prioritizes the Invest in Our New York Act in this session’s budget. State leadership must be focused on recovery and ask those who profited during the pandemic to participate in the recovery with those on the frontlines who sacrificed during the pandemic.  Thank you for your leadership.

SCRIPT: I ask for [Assemblyman/Senator …] to press Leadership to prioritize the 6 bills which comprise the Invest in Our NY Act which will raise revenue in NYS*.  Our communities were already underfunded before the pandemic. Even with the American Rescue Plan, we are facing cuts to our housing and healthcare, agricultural programs, our schools and teachers, our towns and cities. We suffered together, now we need to recover together, and ask those who profited during the pandemic to participate in the recovery with those on the frontlines who sacrificed during the pandemic.  I ask for [Assemblyman/Senator …] to push hard for the Invest in Our New York Act.”

The covid-19 pandemic has resulted in millions of New Yorkers who can’t make rent or put food on the table. But the wealthiest have grown $77 billion richer during the pandemic. Our NY State Legislature and Governor Cuomo must end tax breaks for the wealthiest and start investing in our New York

The Invest in Our NY Act is a package of 6 bills which would raise more than $50 billion in much-needed revenue by:

● Progressive Income Tax S2622/A4604 : Creates a tax system where New Yorkers pay a higher rate if they earn significantly more money. RAISES $12-18 BILLION. Right now, individuals with incomes between $21,400 and $1,077,550 are all taxed at roughly the same rate of 6.5%. Higher earners should pay a higher rate. This bill would raise the tax rates on the top 5% of income-earners ($300,000 and above). Sponsored by Senator Robert Jackson and Assemblymember Demond Meeks

● Capital Gains Tax S2522/A3352 : Taxes income from investments like stocks same as wages. RAISES $7 BILLION. Rich people make much of their income from investments like stocks, not from their jobs. The federal government taxes investment income at a much lower rate than wages. New York can fix this by adding a tax to investment income that’s equal to the tax break the rich are getting from the federal government. Sponsored by Senator Gustavo Rivera and Assemblymember Ron Kim

● Heirs’ Tax S3462/A4643 : A progressive tax on large sums of inherited wealth. RAISES $8 BILLION. Many rich people also make their money from inheriting enormous sums. They can make up to $5 million in a year through inheritance and pay no tax on it. Inheritances of less than $250,000, family homes up to $2 million, money from pensions or retirement funds, and family farms will not be affected. Sponsored by Senator Jabari Brisport and Assemblymember Michaelle Solages

● Billionaires’ Tax S4482: An additional tax on billionaires, and constitutional amendment to allow a wealth tax. RAISES $23 BILLION IN THE FIRST YEAR, $1.3 BILLION PER YEAR THEREAFTER. New York already has a wealth tax: it’s called a property tax. Homeowners pay it every year. But if you own a massive stock portfolio, it is not taxed. This tax would treat billionaires’ gains in wealth as income, and these increases would be taxed at income tax rates. Additionally, a constitutional amendment would allow the state to tax large sums of intangible wealth—i.e., stocks, bonds and company ownership— in the future. Sponsored by Senator Jessica Ramos and Assemblymember Carmen De La Rosa

Taxing Corporations and the Financial Sector:

● Wall Street Tax S3980: A small tax on Wall St. financial transactions. RAISES $12-29 BILLION. Unlike other major financial centers like London and Hong Kong, New York doesn’t place any tax on financial transactions. The financial industry is the state’s largest industry: it makes up 30% of our economy. This bill places small taxes on trades of stocks, bonds and derivatives; a similar tax on stocks existed in NY until 1981. Sponsored by Senator Julia Salazar and Assemblymember Yuh-line Niou

● Corporate Tax S2833/A4595 : A bill to repeal the Trump tax cuts, by restoring taxes on the profit a corporation makes each year. RAISES $9 BILLION. In 2017, Trump’s tax cuts reduced the federal corporate profit tax rate from 35% to 21%, and cut taxes on real estate businesses by 20%. New York can end these tax breaks in our state so that businesses pay the same tax as they did three years ago. Sponsored by Senator Brad Hoylman and Assemblymember Anna Kelle

More details on each bill here. 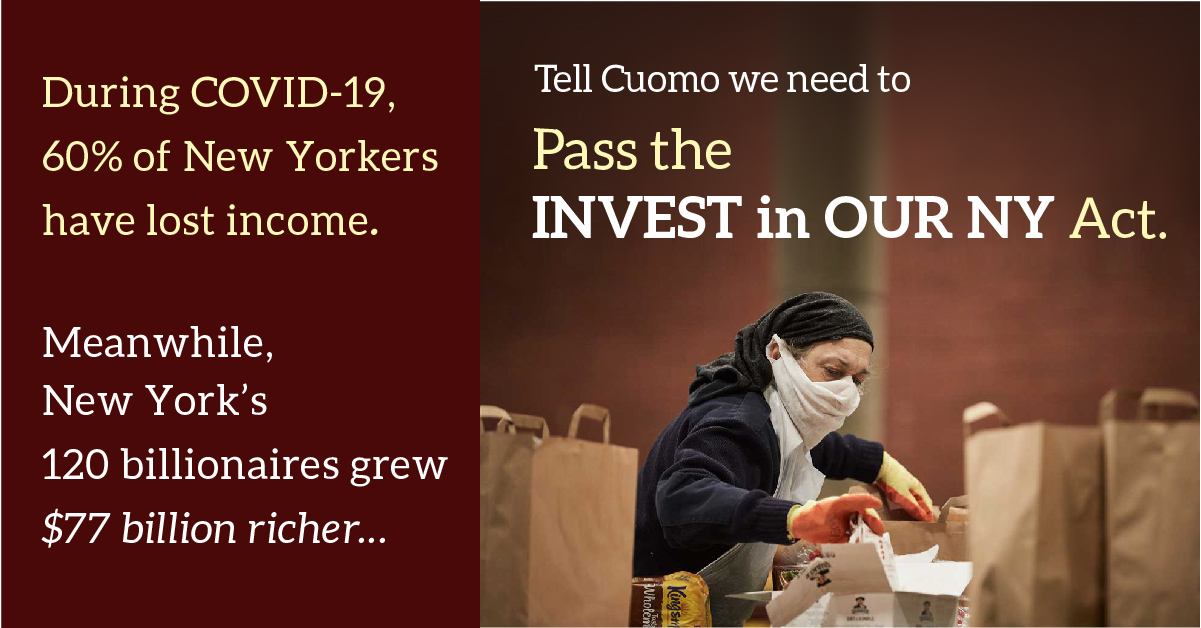