This past week was brutal for America.

17 people, mostly children, were gunned down at a high school in Florida. That was the 18th school shooting in the U.S. in the last 34 days. What is going on in this country when a child cannot go to school without her or her parents fearing for her life?

Note that this shooting wasn’t perpetrated by a Mexican, a Muslim, or any other number of minorities the president likes to target.

This was a 19-year-old white man, too young to buy a beer, but old enough that in the state of Florida he could wait 15 minutes to clear a background check, and walk out with a deadly assault rifle with multiple magazines carrying 30 rounds each.

It’s easier in Florida to buy that kind of weapon than to purchase a hand gun.

As we learn more about the senseless and tragic shooting in Florida, my prayers are with the victims and all the students, teachers, law enforcement and families impacted by this violent attack. We must understand how to recognize warning signs and better protect our communities.

During a call-in town hall meeting with voters this past week, in response to a question from a caller about banning assault weapons and high-capacity magazines, like the one used in Florida, Faso said:

Problem is there was a so-called assault weapons ban that was enacted some years ago during the Clinton administration, and what the Justice Department found when they did a study of this after about 10 years of experience they found it had no appreciable effect upon the incidence of gun violence in our country.

Faso is right and wrong. He’s cherry-picking his talking points directly from the NRA playbook, which likes to cite that study because it sidesteps one important fact: That 1990s legislation, while it banned high-capacity magazines, grandfathered in an estimated 25 million large-capacity magazines.

And yet, it still worked. This is a chart from the Washington Post. 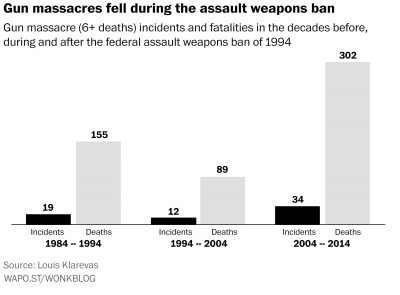 It’s by author Louis Klarevas, for his 2016 book “Rampage Nation,” which shows the before ban stats on mass shootings, during, and after the ban was lifted. Note that dip in the middle, during the ban, in both incidents and deaths. Klarevas says a mass-shooting is one in which six or more people are shot and killed.

Klarevas says that the key provision of the assault weapons bill was a ban on high-capacity magazines capable of holding more than 10 rounds. “We have found that when large capacity mags are regulated, you get drastic drops in both the incidence of gun massacres and the fatality rate of gun massacres.”

During his town hall Faso did say that we’re not doing enough on mental-health background checks.

Yet when Donald Trump nixed a rule that required exactly that—a requirement that mental health data be part of a national database to screen gun buyers—John Faso said absolutely nothing.

What was he waiting for? It’s not as if this is new. There have been nearly 300 school shootings in America since 2013 — an average of about one a week.

This isn’t the worst part. Hardly.

John Faso not only offers mere feckless “thoughts and prayers” in response to this senseless killing. He’s actively voted to endanger the lives of your children.

During his town hall he said absolutely nothing about handguns, and this is the single place where Faso is right. Assault weapons aren’t the only problem. Handguns are far more deadly to all Americans.

So what has Faso done about handguns? He voted in favor of a bill that would put every New Yorker in far greater danger, a bill that police organizations nationwide oppose.

New York, like all 50 states, has its own gun laws. While receiving a concealed carry permit in New York varies by county, it requires a background check and at least stating that you have a clear mental health history.

Yet this past December John Faso voted in favor of allowing anyone from one of seven states that don’t require either a concealed carry permit or training—Maine, Arizona, Kansas, Wyoming, Alaska, Vermont, and Missouri—to visit the area with as many guns and as much ammunition as they please.

The bill has now made its way to the Senate, even as there’s zero evidence to prove that more guns make us safer. Quite the contrary: No other nation is nearly as armed as we are, and no other nation has remotely as much gun violence per capita.

If houses were burning down all over NY 19, do you think Congressman Faso would call for mandatory sprinkler systems in building codes, or would he offer his “thoughts and prayers?”

Or maybe he’d light the match himself.

And don’t think we in NY 19 would be allowed to bolster our own laws in the wake of Faso’s horrific record on guns endangering your kids. Because if this horrible concealed carry law passes the Senate and Trump signs it, New Yorkers could order permits from any other state with weaker gun laws.

That’s already possible with residents of 36 other states that share reciprocity with the state of Utah—which sells a mail-order concealed carry permit. That permit at least requires training, but a federal law that allows concealed carry for anyone would effectively gut all background checks, training, mental health and other requirements nationwide.

We wonder what useless statistics and “thoughts” John Faso would offer when confronted with the courageous, deeply anguished children in Florida who are calling out Faso and his fellow members of Congress, “who take money from the NRA and use children as collateral.”

“My message for the people in office is: you’re either with us or against us. We are losing our lives while the adults are playing around,” says Cameron Kasky, a junior at Marjory Stoneman Douglas HS who survived the shooting.

Probably worst of all, Faso’s vote in favor of gutting New York’s own laws flies directly in the face of both the visceral fear and anger demonstrated in the wake of the Florida mass shooting and of what 83 percent of gun-owning Republicans say they want. A 2017 Johns Hopkins study found that all voters want higher, not lower gun safety standards. The survey found that 83 percent of gun owners say, “That a person who can legally carry a concealed gun should be required to pass a test demonstrating they can safely and lawfully handle a gun in common situations they might encounter.”

Ask yourself then, who does John Faso represent? If it’s not his Republican constituents, why did he vote to endanger your children?

REP FASO: I’m really disappointed that you voted in favor of H.R. 38, the Concealed Carry Reciprocity Act. This is the NRA’s top legislative priority and will create a race to the bottom in gun safety standards. Will you explain to your constituents why you sided with the NRA instead of our lives? Will you commit to voting against any further bills that would weaken current gun safety laws?